﻿﻿ LANDSCAPE FOR URBAN ECOSYSTEM SERVICES | FACULTY OF DESIGN AND ARCHITECTURE

It is expected that more than 60 percent of the world's population will live in urban areas by 2030. This is evidenced by the growth of various new urban areas that are more complex and comprehensive, especially in developing countries such as Malaysia. However, if urban development is not balanced with a perfect landscape, it will create an atmosphere of lifeless built environment. Thus, the urban landscape needs to be planned, designed, developed and managed as wisely as possible for the benefit of nature and the survival of urban life. These developments place the practice of landscape architecture among important and challenging fields in parallel with global development.

Scanning the development of landscape architectural practices, it appears the result of garden development. The park began to grow rapidly in the 16th century, developed exclusively in private areas, especially the courtyards of palaces, royal estates, aristocratic houses and even religious complexes. As park development expands beyond public areas, park design and development becomes increasingly intensive. Public parks have become part of urban development and their role is becoming increasingly complex. Thus, in the 19th century, the practice of landscape architecture began to be introduced to garden designers especially public parks and subsequently spread widely when many new urban parks were developed.

Nowadays, with increasingly complex urban life, an increasingly saturated built environment and increasingly limited resources, landscapes are becoming increasingly relevant and highly significant to all communities. The professional scope is currently transcending conventional practices towards a vision of more sustainable development - involving the development and management of urban ecosystems as well as human habitat environments for survival.

Green infrastructure is a collective approach in urban landscape development nowadays. It refers to the integration of urban green areas or hubs and their networks to provide more significant landscape value especially on the functions and services of urban ecosystems such as:
 habitat space for a variety of life to enhance urban biodiversity;
 catchments, reservoirs and rainwater flow control in stormwater management;
 a source of recreation for urban dwellers towards a healthy and prosperous lifestyle;
 urban forests and plantations to increase urban productivity; as well as
 natural elements that can control the microclimate, nutrient cycle and so on.

Green infrastructure generally includes a variety of quality green spaces, areas and interconnected urban green networks such as urban forests, recreational parks, wetlands, reservoirs, plantations, river corridors and drainage systems, parkways and various types of green spaces. exists within the city for the convenience and stability of the urban ecosystem.

Physical development and infrastructure in urban areas contribute to the reduction of space and land green areas. Vertical landscaping is a recent and increasingly popular trend in building design to enhance the greenery of modern cities. Intensive planting of plants on wall surfaces as well as roofs of buildings is an innovation of urban horticultural practices that responds to environmental and urban landscape issues. The plants and soil that cover the building act as a natural insulating material-theoretically it can reduce the internal temperature and directly save energy consumption. This is part of the contribution to the quality of the urban ecosystem. 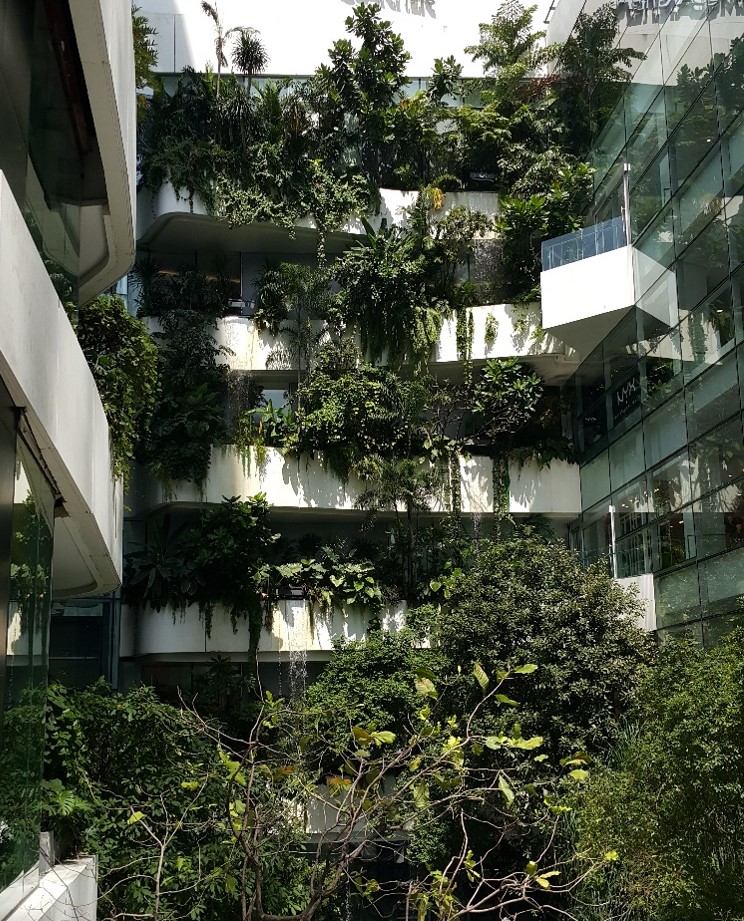 On the other hand, urban landscapes are often associated with low natural visual quality. Skyscrapers and glass surfaces dominate the space and create a rigid and limited view. With a Live Wall approach like this, the visual quality of the urban landscape can also be ‘softened’ and ‘turned on’ through the presence of plants as a natural element on tall buildings.

It is common knowledge that urban land is not reserved for large -scale commercial agricultural activities. Urban green areas are specifically allocated for recreational purposes and conservation of green buffer zones. But in recent years, urban gardening has begun to become a practice at the urban community level, which is to cultivate unproductive land and space into an active cultivation area even in limited space. Many vegetables are grown and give a return commensurate with the effort made.

In the practice of landscape architecture, urban gardens are not only seen on the productivity and survival needs, but also the quality and function of the space to the community and the environment. Transformation of space into a more functional garden such as ethnobotanical garden, kitchen garden, fruit orchard and so on.