﻿﻿ Land Surface Temperatures Drop, Thanks To MCO | FACULTY OF DESIGN AND ARCHITECTURE

KUALA LUMPUR: The implementation of the Movement Control Order (MCO), which has reduced people’s movements to halt the spread of Covid-19, has led to an unexpected boost for the environment.

The environmental quality of city centres, which has been affected by heatwaves and localised haze due to environmental degradation and rapid urbanisation, is now showing an improvement.

Satellite data compiled from various sources indicates a boost in air quality in Peninsular Malaysia and a general reduction in land surface temperatures (LSTs) here during the MCO period.

Universiti Putra Malaysia associate professor and a geographical information system specialist Dr Mohd Johari Mohd Yusof said data showed that all 11 constituencies in the capital recorded reductions in LSTs, thanks to the MCO.

He said five constituencies had recorded a LST drop of more than 10°C. The areas are Bukit Bintang, Seputeh, Cheras, Batu and Kepong.

Johari said the constituency with the most improved LST was the central business and tourism district of Bukit Bintang, where the LST dropped 9.7°C compared with 41.1°C last year.

He attributed the trend to dissipating greenhouse gases in the city as people were forced to stay at home and restrict the use of vehicles.

His calculations were based on the United States Geological Survey’s satellite images for March 24 this year and March 23 last year. Both days were clear and sunny, and chosen for comparative analysis due to similarity in weather conditions and proximity dates.

This, he said, could be used to map out future green initiatives related to car use and carbon emissions.

He, however, cautioned that not everything appeared to be rosy on the environmental front this year as data showed that “heat islands” were expanding in Wangsa Maju.

The findings were based on the fact that it recorded the smallest drop in LST this year, which is 6.76°C.

“Similar patterns were observed in Batu and Kepong, where red zones or heat islands are expanding as in dense urban areas.”

“This is due to the urban heat island phenomenon, where trapped greenhouse emissions accumulate and cause temperatures to increase before shifting to residential areas. This happened because the MCO caused a major cutback in vehicle use in the city centre.

“The neighbourhoods have overtaken the city in terms of heavy use of air-conditioners and electronic systems that have been predominately attributed to office buildings in the city before the implementation of the MCO.”

Johari, however, said as LST was based on heat trapped in surfaces, such as cars and buildings, as well as in the ground, it translated only to a marginal difference in overall air temperature (or regular temperature).

Maps produced by the organisation depicted a 30 per cent reduction in nitrogen oxide levels in Malaysian skies.

This was captured in two maps. One depicted the density of the gas between March 18 and April 13 this year, while the other showed the same aspect during the same period last year.

Think City attributed the dramatic reduction to the sharp decline in the use of vehicles and people’s movements, shadowing patterns of Europe, China and the US.

“As we are forced into hibernation, our cities are changing in ways we hadn’t thought possible. Our mapping of changes in nitrogen dioxide between now and this time last year shows that as Malaysians move about less due to the MCO, there are reduced vehicle emissions.

“This is evident along the west coast of Peninsular Malaysia, where 20 million people live.” 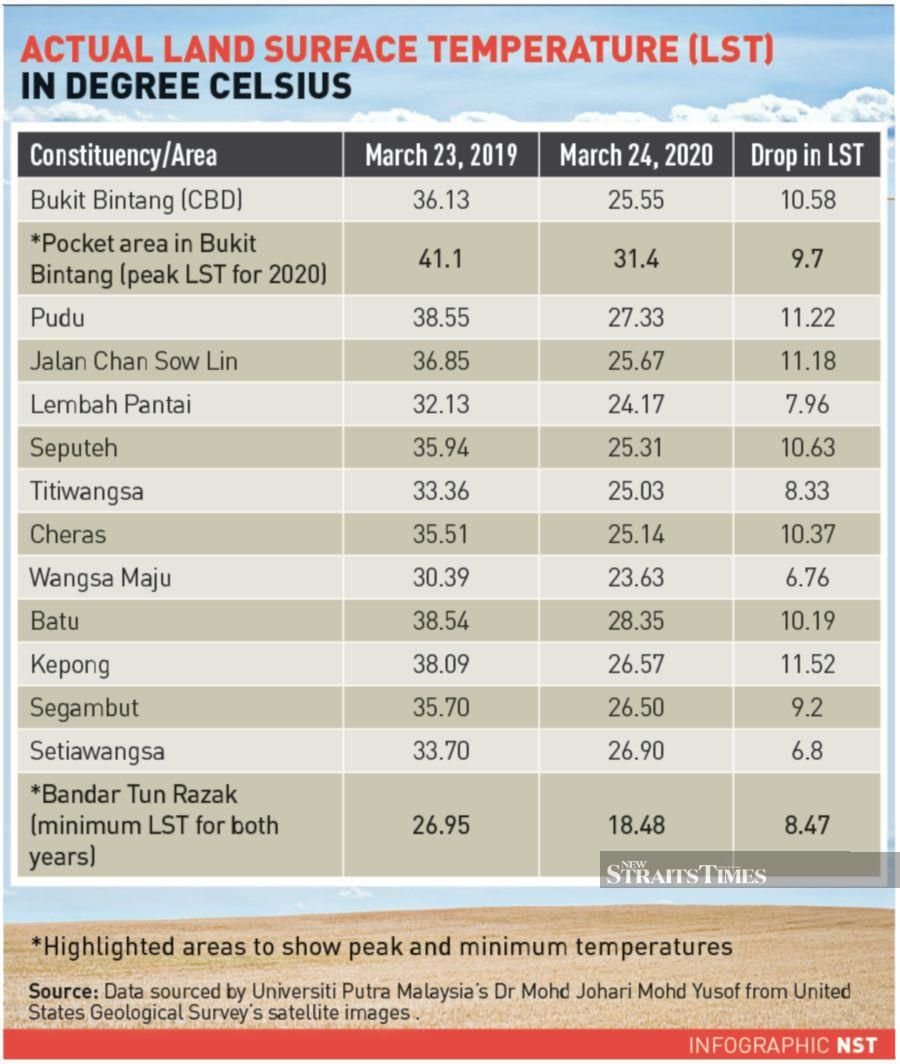 Connecting with Nature to Improve Health and Well-Being