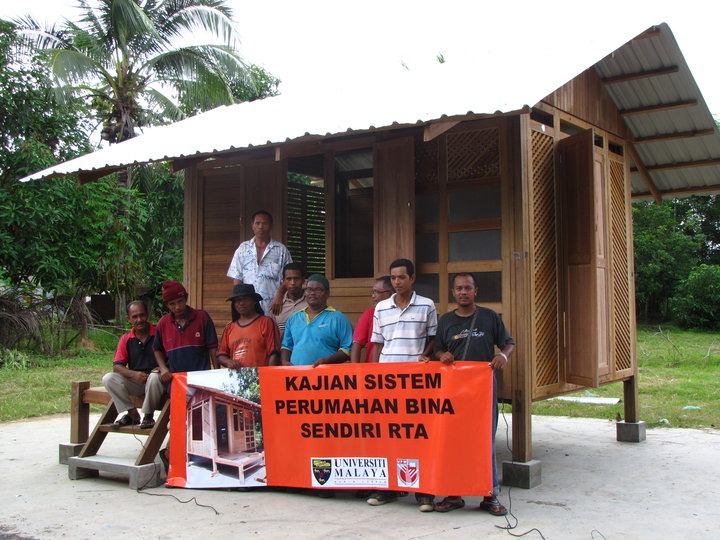 Part 1 (14 June 2010)
I never would have thought I was able to do it. The task to transport the whole prototype is one thing, the arrangement to find people to participate building it together is another. What am I rambling about? It's to do with my unfinished research on self build housing in Malaysia.

Sunday: 5.30am - Had to wake up the children to prepare them for an early trip up north. And had to prepare my son, Alif for his workshop in his school. It was a good morning. Everybody was doing what they are suppose to be doing early in the morning. The girls took their shower, got dressed, brought along their own bags full of toys and books, wore their shoes and waited for the car to be fiiled with other baggage. Exciting... But it was also sad since I couldn't take my son along. Only the girls are coming... and of course with the only maid I have to depend on. After sending Alif off, our trip to Penang began. I was feeling this butterflies in my tummy through out the journey. Just like before I had to give lectures or presenting some papers somewhere. I was also tired since I couldn't sleep last night thinking of what lies ahead of me. All the components were able to fit into this 16' length lorry...

11.00am - Reached Sg. Dua, Penang - the place where the prototype was made. Had to sleep even for half an hour. My supervisor reached the same destination by 12pm. We all had lunch at his father's place. Then after that all the components were loaded onto the rented lorry from across his kampung home. Another agonizing 2-hour journey before reaching Padang Terap. My butterflies are getting wilder... The briefing to the people is also this afternoon. All LCD projector and my old laptop set up in a hall next to the proposed site. Only 16 turned up. That's better than nothing... I sure wish someone would tell me that I did OK. I don't know, but my supervisor didn't comment on it. So I assume it was OK. The few that turned up for the briefing that afternoon. I was speaking in northern dialect!!

Check into an inn by 6.30pm. It's late, everybody's hungry and tired. The room was medium size, we asked for 2 extra single mattresses on top of the readily available queen bed with a sunken mattress. I'm looking forward to a good sleep. But tomorrow's THE day. The 1st day we actually test our prototype with the people. My butterflies are at it again every time I think about it. Advertisement is important in this case.

Part 2 (15 June 2010)
​Monday: 6.30am Today's the day! Today's the day that I'll know what people will think about the RTA house. Butterflies too many in my tummy. I feel I need to vomit. It's too overwhelming. I brought along our workers to the site to help organise the materials and tools.

We reached Kampung Tanjung Luar around 7.30am. It was only a 10-minute drive at 60-70 km/hour. Too short! 7.30am No one's around yet. But as we drive into the JKK's house compound, the head of the village and his wife greeted us... with breakfast! But that was part of the deal - to prepare 3 meals a day for the next 4 days. While waiting for the participants to come, we had breakfast. Fried noodles and black coffee. Real black. My butterflies has started to calm down. I don't know why. I wish my supervisor is here. He had to go back to KL this morning - family matters. I wish my mother is here too. I wish my late father could have seen this too. Erection of main structures.

9.00am All 8 of them assembled and started to read the manual. I was busy with my camera and video camera back and forth recording the event. So busy that I didn't notice the sun is burning through my skin slowly. The main structures (columns, floor and roof beams), floor modules and roof trusses assembled within 1 hour and 15 minutes. WOW! Amazing... Before I forgot to mention, this team consisted of adults age ranging from 34 - 45 years old. They work in smaller groups. A group of 3 did the roof, the other 3 did the floor and the other 2 did the 'anjung'.The structures were up before 11am. All 11 panels of wall modules were installed by 11.25am. Another milestone to record for this group. It took them another hour to finish the roof panels to be installed... Unfortunately, during the installation there were discrepancies in the tagging of components against the numbering in the illustrated manual. Eventually we sorted out what went wrong. It was not easy... everybody's tired and want to finish up quickly. The team after the unit completed. THE day that I was so nervous about turned up to be just great. I managed to control the crowd, I managed to get them build it, I managed to get all the questionnaire answered by each of them, I managed to do all that... despite the butterflies. It was a good day - a damn good day! Nope a damn GREATTT day!

5.00pm I went back to my room greeted by the laughter of my darling daughters and feeling that I have done something right.It feels good but then I've just remembered, I have another 3 more days before the whole thing ends.

Tuesday: 6.30am As usual, I'm up early, went out to bring the workers too. Had a light breakfast with the workers from our team and the JKK's family members and WAIT... waiting is an agony. Especially you do not know what to expect but you know what to do and even envision it many times how it should be done! So we waited... and waited... and waited until at aound 9.00am a few teenagers and youths came around.

9.15am Strategise before commencing work. I let them have their breakfast and at the same time gave a short briefing (how short is a short briefing can be) underneath that temporary tent-like food stall under a big old tree. The weather is still sunny.. I thank God for that... For this particular group, I noticed that most of the times, they do consult the illustrated manual that was given and even among each other. I supposed since there are many inexperience participants, they just had to.

2.00pm The final touch.. Surprise surprise... task completed! What another great day for me... I'm beginning to get the hang of this by now. The boys have been very cooperative and diligent in their task today. We had a late lunch but everyone was able to go back home EARLY. And as for me, I went back to the hotel, took a nice long shower, brought the girls out to the nearest town - that would be Kuala Nerang and bought them colouring books. What else can you buy there?! As long as the munchkins are occupied in the room, it's okay then...

And so the 3rd and 4th day went by the same except that on the 3rd day, we had REPORTERS from Utusan covering our side of the story. I didn't expect them to come at all. But my supervisor has a bigger cable connection with the chief editor - they are neighbours! We got a 4 full-page coverage on a National newspaper. I wouldn't say one of the most leading newspaper but they did their job just fine. The objective was to educate the public of the possibilities of having such opportunities presented to them when it comes to housing provision. I met that objective the moment I received calls from people and even organisations that expressed their interests. So how do I complete my thesis on this? It's going to be difficult as I'll be busy again with routine schedule of being a MOMMY (1st), then a lecturer (2nd) sometimes responsibilities as a daughter (3rd)... I HAVE TO get there... Insya Allah... Sofea enjoying her lunch in the RTA cabin 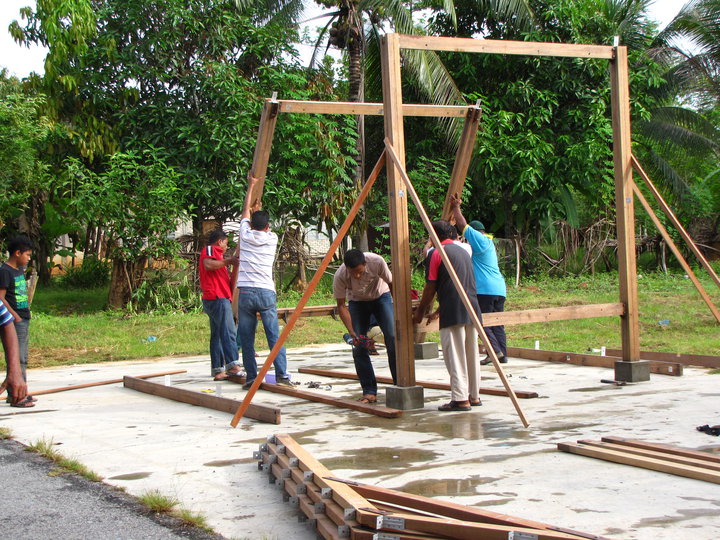